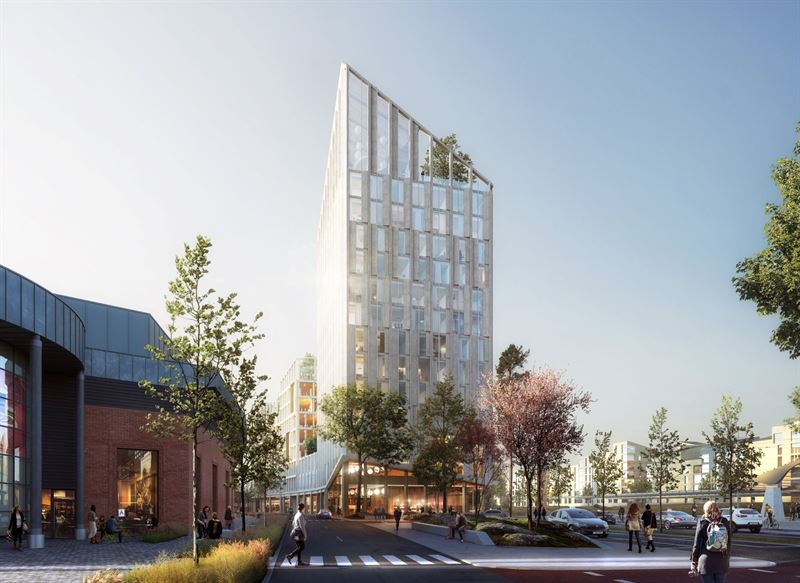 Scandic to open new hotel in Ski outside of Oslo

Press release | 15 Sep, 2022 | 07:45
Scandic Hotels has signed an agreement for a new hotel in Ski outside of Oslo, Norway.  The hotel will be centrally located beside the train station and with 15 floors, it will be a new landmark in the city. In addition to 220 rooms, the hotel, which is expected to open in 2026, will also offer meeting facilities and a rooftop bar with panoramic views of the city.

Just a short train ride from Oslo lies the town of Ski in the municipality of Follo. In the coming years, Ski is expected to see strong growth through renovations of the central station and downtown area as well as the new residential areas that are emerging. With the new Follobanen railway that is expected to be completed during 2022, travel time to Oslo is also expected to be significantly shortened, making the area even more attractive to commuters.

- We are very happy to have had this opportunity to open a new Scandic hotel in Ski.  This agreement will strengthen our position in the region surrounding Oslo, which is undergoing rapid development, and at the same time create an exciting new meeting place for people who live and work in the city, says Asle Prestegard, Head of Scandic Hotels Norway.

Scandic’s new hotel will be a landmark that with its central location and proximity to Oslo will attract business and leisure travelers alike. The 15-story building will house both the hotel and offices, and it will be a new meeting hub in the city.

- We see great potential for hotels at public transport hubs. Together with Scandic, we are developing a hotel property that will have a high environmental performance and we’re extremely happy that Ski is being added to the list of cities where we’re establishing hotels, says Morten Austestad, Development Director at Bane NOR Eiendom.

When the hotel opens, like the majority of Scandic’s hotels, it will be ecolabeled according to the Nordic Ecolabel’s new, tougher environmental requirements. The hotel’s use of ecolabeled products and chemicals and 100 percent renewable electricity, the absence of single-use disposables, reduced water consumption, a climate-friendly menu and reduced food waste formed the basis for certification.

The rooms at the new hotel will be designed with circularity in mind and parts of the room interiors will be environmentally certified or made from recycled materials, most of which can be reused or recycled during renovations. The property will also be constructed according to a high environmental and technical standard with the goal to be certified according to BREEM Excellent, one of the highest levels in environmental certification for buildings.

The new hotel will further strengthen Scandic’s presence in the hotel market in the growing region around Oslo. Scandic already operates 19 hotels with a total of 4,211 rooms in and around the capital.

About Scandic Hotels Group
Scandic is the largest hotel company in the Nordic countries with more than 280 hotels, in operation and under development, in more than 130 destinations. The company is the leader when it comes to integrating sustainability in all operations and its award-winning Design for All concept ensures that Scandic hotels are accessible to everyone. Well loved by guests and employees, the Scandic Friends loyalty program is the largest in the Nordic hotel industry and the company is one of the most attractive employers in the region. Scandic is listed on Nasdaq Stockholm. www.scandichotelsgroup.com